The global financial crisis: Behind us but far from over 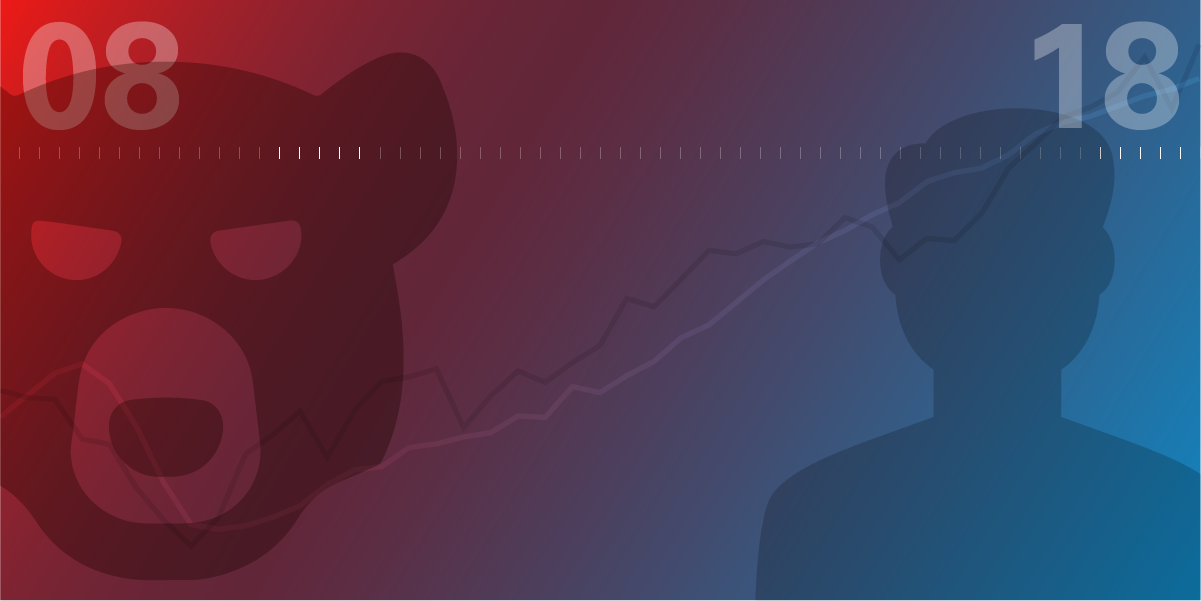 Ten years ago this month, Lehman Brothers, the fourth-largest US investment bank, filed for bankruptcy protection. It was a seminal event in what has come to be known as the global financial crisis (GFC). Even a decade on, the massive damage it inflicted across the world continues to shape both the global economy and investor behaviour.

Just how bad was it?

The epicentre of the crisis was a wave of US subprime mortgage failures that hit the housing and financial sectors and then spilled over into the broader economy and far beyond the United States. It created a synchronised global recession. For a number of countries, including Greece, Italy, and Spain, recovery from this recession to pre-crisis GDP levels has taken even longer than it had from the Great Depression. Other countries still aren't there yet.

Although numbers alone can't capture the full impact of what happened, below are some indicators for the United States that at least give a sense of the scale of the crisis.

Sources: Vanguard, Financial Crisis Inquiry Report: Final Report of the National Commission on the Causes of the Financial and Economic Crisis in the United States, and "The 2007–2009 Financial Crisis: An Erosion of Ethics: A Case Study" in Journal of Business Ethics, December 2017, Volume 146, Issue 4, pp. 805–830.

Some healing from the GFC and some enduring scars

"Obviously, we're in a much better place right now than we were a decade ago," said Roger Aliaga-Díaz, Vanguard chief economist for the Americas. "The global economy has been expanding—the US is in its ninth year of expansion, which is the second-longest on record, and most developed economies are at or near full employment. And inflation remains modest despite unprecedented monetary stimulus.

"But on the other hand," he noted, "the GFC set in motion or accelerated some deep shifts in the global economy that leave us still short of 'pre-crisis normal,' according to some key metrics. I'd point specifically to wages, global growth, international trade, and interest rates as prime examples of that."

And yet the financial markets have been surprisingly robust

"The contrast between the economy and the markets couldn't be starker," observed Vanguard Chief Investment Officer Greg Davis. "While most economic variables showed subpar performance, stocks have delivered solid returns."

The US market has delivered an outstanding annualised average return of 19% since March 2009 (the crisis-era low) following a meltdown of –47% in the six months prior to that. Those returns put the average annual return for the full ten-year period at 11%, or slightly better than the comparable return of 9% for two decades prior to the crisis.

The performance of bonds was also decent given the low-interest-rate environment—the average annual return for US bonds was 3.5% for the decade. Given the demand for safe assets, neither the extended period of economic expansion nor the unprecedented quantitative easing across much of the developed world has lifted rates very high.

Even including the crisis, returns since 2008 have been healthy

Cumulative total returns since September 2008 (just before crisis), by region

Returns during the global financial crisis

*Data for Hong Kong bond returns were not available.

Note: The periods cover the global financial crisis (September 2008 through February 2009) and the post-crisis period (March 2009 through August 2018).

There's no better illustration of the importance of staying the course through good markets and bad than the US equity market's impressive turnaround since the GFC. Investors with a broadly diversified portfolio of 50% stocks and 50% bonds who didn't hit the panic button saw an average annual return of 7% from the pre-crisis market peak in 2007 through June of this year.

Notes: Stocks are represented by the Standard & Poor's 500 Index. Bonds are represented by the Bloomberg Barclays US Aggregate Bond Index. The 50% stock/50% bond portfolio was rebalanced monthly. Data are provided by FactSet and cover the period from 9 October 2007, through 29 June 2018. Past performance is no guarantee of future returns. The performance of an index is not an exact representation of any particular investment, as you cannot invest directly in an index.

As would be expected, more risk-tolerant investors with larger portions of their portfolios in stocks would have done better. It's worth noting, however, that a 100% stock portfolio would have been under water for the first four years after the market peaked in 2007.

Maybe the GFC's most enduring effect on investor behaviour is greater fear of loss. Millennials who started investing with Vanguard after the GFC were twice as likely to hold zero-stock portfolios as those who started investing before it occurred. For them, market risk seems to be more salient than potential return.

"Bond returns are likely to remain modest and US equities also face some headwinds due to high valuation levels," said Mr. Davis, "which translate into subdued return expectations for the next decade. For all the contrast between the performance of the economy and market returns over the past ten years, we may be heading into a period of lower portfolio returns over the next ten years. A global balanced portfolio may return between 3% and 5% after accounting for inflation, compared with a historical return of around 7%."

One of Vanguard's main goals in providing forecasts about capital markets is to arm investors with realistic expectations about portfolio returns so they can calibrate an appropriate level of savings in order to ensure they reach their investment goals.

The global economy is in a very different place a decade after the GFC and some investors remain risk-shy (especially those who didn't participate in the great stock bull market that ran from 1982 through 2000). But Mr. Davis said Vanguard's investment approach hasn't changed: "Think about how much risk you can take on and still sleep at night, diversify your portfolio across the globe among stocks and bonds, and make sure to rebalance from time to time—those steps should still offer you the best chance for investment success."

The contents of this document and any attachments/links contained in this document have been prepared in good faith. Please note that the information may have become outdated since its publication, and any information sourced from third parties is not necessarily endorsed by The Vanguard Group, Inc., and all of its subsidiaries and affiliates (collectively, the "Vanguard Entities").

This document is being made available in Hong Kong by Vanguard Investments Hong Kong Limited (CE No. : AYT820) ("Vanguard Hong Kong"). Vanguard Hong Kong is licensed with the Securities and Futures Commission ("SFC") to carry on Type 1 - Dealing in Securities, Type 4 - Advising on Securities, Type 6 - Advising on Corporate Finance and Type 9 - Asset Management regulated activities, as defined under the Securities and Futures Ordinance of Hong Kong (Cap. 571). The contents of this document have not been reviewed by the SFC in Hong Kong.

SFC authorization is not a recommendation or endorsement of a scheme nor does it guarantee the commercial merits of a scheme or its performance. It does not mean the scheme is suitable for all investors nor is it an endorsement of its suitability for any particular investor or class of investors.

Copyright, trademark and other forms of proprietary rights protect the contents of this document. You may not copy, publish and/or distribute any derivative works from the information from this document.